In Vicky Smith’s most abstract works to date, the body feels very present, as it does so often in her filmmaking.   Her techniques for direct mark-making on the film’s surface are astonishing. Tiny white marks fiercely scratched into the black of the raw film-stock, pinpricks, tears and scratches becoming abrasions and bruises suggest physical vulnerability. Things dribbled onto the filmstrip, things scratched into it – the filmstrip, too, is paramount in Vicky’s films.

Projects and exhibitions in 2018

I screened Small Things Moving in Unison in Vivienne Dick’s  But Still, Like Dust, I’ll Rise (after Maya Angelou) curated exhibition themed around  ideas of female corporeality, autonomy, strength, and vulnerability. Staying with Viv in Dublin was fabulous and unusually hot so we went swimming in Dublin Bay.

Curator Ruth Somalo, having read my piece in Sequence Journal: Full Body Film: (http://www.academia.edu/30912563/Full_Body_Film) invited me to come and screen and discuss several of my early films. The audience responded well to Rash 1997 and along with Vanessa Renwick’s use of voice in personal humour inflected commentary. PSI FINISHXXX Maria Lassnig  developed into reason 2   for picking up a camera again and for potentially using my own voice again mumbling singing etc Montreal Amtrak for SAS women in animation xxxx 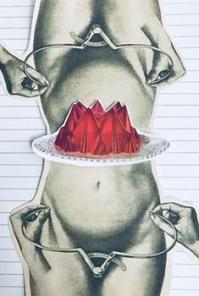 Smith invites an almost clinical engagement with these internal fluids. Enlarged on the screen, they resemble scientific microscopic images that bring us into an uncanny physical proximity with the artist’s body. The choice of material support – clear leader rather than negative stock – bestows on the film an ethereal quality that elicits both fascination and discomfort (Kim Knowles: 2013: n.p.). ‘Blood, Sweat and Tears: Bodily Inscription in Contemporary Experimental Film’, Necsus European Journal of Media Studies: http://www.necsus-ejms.org/portfolio/autumn-2013_waste.

An old film from 1995 My Moon Her World, was screened alongside Small Things in ‘Matters of Being’ in Independent Film Show, Naples.  Here’s a review I kept of the film from the 90s and I think from Frameworks festival,  San Francisco.

May: invited by Analogue Ensemble to perform at Whitstable Biennale for the programme ‘Resisting Expectations’ I adapted my piece Agitations to the festival theme of ‘Swimming Home’ and the sea and responding to the crab traps.  inspired by David Gatten’s What the Water Said the idea that a haul of film, softened by exposure to saltwater,  is sensitive to further inscription thru means other than light and camera x.

February: The first screening of Small Things Moving in Unison in Edwin Rostron’s excellent ongoing initiative in the field of experimental animation ‘Edge of Frame Animation’. The film was projected in ‘Voyages Elsewhere’, at Close Up Cinema in Shoreditch. Bea Haut had advised me that the projection at Close Up is unrivalled and she is right.

Mine and Nicky Hamlyn’s volume on experimental animation Experimental & Expanded Animation: Current Perspectives and Practices, is now available as a head back copy. We will be developing the topic further in a conference at UCA Farnham in Feb 2019.

BEEF: One Year of Material Practice at The Brunswick Club (http://www.beefbristol.org/writings/)